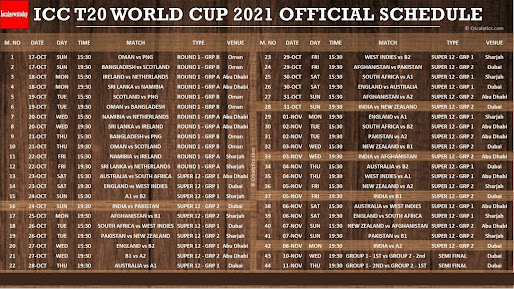 T20 World Cup 2021 Schedule: The International Cricket Council (ICC) has declared the schedule of the upcoming T20 World Cup 2021. India will start their campaign of the tournament with the match against one of their popular rival Pakistan on October 24. Both Pakistan and India have been placed in Group II of this World Cup. The ICC has already declared the schedule of the T20 World Cup. At the same time, Afghanistan, which has been under Taliban control, will be going to play its first match of the tournament on 25 October in Sharjah.

Under the leadership of Virat Kohli, Team India will be going to face New Zealand on 31 October and Afghanistan on 3 November. As mentioned earlier that the T20 World Cup is to be played in UAE and Oman from 17 October to 14 November. The knockouts will be starting from 10 November with the first semi-final of the tournament on November 10 and the second semi-final will be played on November 11. The grand finale of the T20 World Cup i.e. the final match will be played on November 14 whereas November 15 has been kept as the reserve day for the final.

Qualifying round will begin on October 17

A total of eight teams, that have been included in both Group 1 and Group 2, have already made their place in the Super 12. Now eight teams will be competing in qualifier matches in the first round to make their way to the Super 12. As mentioned, these eight teams are divided into Group A and Group B. The tournament will start with the first qualifying match of Group B that is to be played between hosts Oman and Papua New Guinea (PNG) on 17 October. On the same data, the second match of the same group will going to be played between Scotland facing Bangladesh. Whereas in Group A, matches between Sri Lanka-Namibia and Ireland-Netherlands will be played in Abu Dhabi on October 18. The top two teams of each group along with the remaining eight teams will participate in the second round that is in the Super 12.

The ICC has said that "The host of the T20 World Cup will be BCCI. All matches of this tournament will be played at Sheikh Zayed Stadium in Abu Dhabi, Dubai International Stadium, and Oman Cricket Academy Ground.

Second round will be the Super 12

The second round matches between Super 12 will be played from October 23. The first match will be played between Australia and South Africa that are included in Group 1 whereas England and West Indies match will take place on the same day.

November 5: India vs Qualifiers (Victorious of Group B in the qualifying round)

November 8: Qualifiers vs India (Runner-up team from Group A in the qualifying round)

Schedule for Semifinals and Final

November 15: Reserve day for the final